In July, the Lithuanian government announced a surprise U-turn on its prior commitment to enhance protection for the ancient Punios Šilas forest which is part of the Natura 2000 European ecological network. It is one of Europe’s most ancient forests, home to more than 100 endangered species and is at risk from commercial logging and the threat of increasingly intensive hunting. 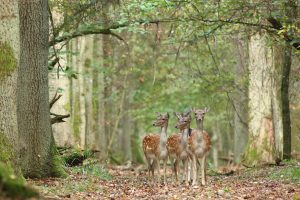 The country’s former environment minister Kęstutis Navickas pledged to upgrade the forest’s protection – prohibiting all logging and hunting – but he lost his job late last year and his temporary replacement, Kęstutis Mažeika, has scrapped the project. Mažeika is a hunter and he has advocated a stepping up of commercial hunting activity in this ancient woodland.

More than 100 leading figures in Lithuanian civic society have backed a petition calling on the government to replace Mažeika and restart the forest’s planned conservation upgrade. Campaigners include Baltic Environmental Forum directorŽymantas Morkvėnas who described the U-Turn as a ‘slap in the face’ to the country’s newly elected environmentalist president Gitanas Nausėda who has promised to make Lithuania ‘greener’ during his tenure.

The veto was issued on 12 July the same day as Nausėda’s inauguration. Since 2016, the parliament has been led by the Lithuanian Farmers and Greens Union. It is a populist party which only held one seat at the previous election and was founded by Ramūnas Karbauskis – an agrichemicals magnate who is one of the richest people in Lithuania.

The forest – located within a dramatic bend of the River Nemunas – is currently split between a small and highly protected 457-hectare nature reserve and a larger 2,313-hectare botanical zoological reserve where hunting and logging is permitted. The proposals scrapped by Mažeika would have seen the nature reserve expanded to cover the entire site, outlawing all commercial activities in the forest.

Mažeika vetoed the project on the grounds it would prohibit local residents from gathering mushrooms and berries. This claim is misleading because the government’s own, now abandoned conservation proposals included enhanced visitor infrastructure and unlimited foraging rights (full documents available on request).

There is speculation that Mažeika’s real motivation is to please hunters and those who wish to profit from the ancient forest and undermine its unique basis for enhanced conservation. There is no mention of spruce bark beetles in Mažeika’s 12 July order to scrap the project.

Morkvėnas said: ‘Punia is one of a very few ancient forests left in Lithuania. It is a “small brother” to Białowieża but due to its large landscape and habitat diversity it is a shining pearl of natural heritage in Europe. Some of its oak trees are around 600 years old. Such ancient forest is now nearly extinct in Europe.

‘Experts assume that real motivation of Mazeika (who is himself if passionate hunter) is actually hunting. Currently hunting in Punia is organized by the state forestry company but Mazeika has said he would like these rights to be administered by a private hunting club instead. This could lead to more intensive and less regulated hunting practices.

‘Mazeika’s decision to stop the enlargement of Punia’s strict protection status was issued on 12 July as a slap in the face to Lithuania’s new president Gitanas Nauseda. The president expressed a vision to make Lithuania “more green” during his term. This sad date for Punia coincided with the official inauguration date of the newly elected president.

‘Punia is one of Europe’s most important Natura 2000 areas. This case should be of concern to the European Commission because in parallel with this decision, Lithuania is also facing an infringement case over its failure to fulfil the EU Habitats Directive and insufficient measures to ensure appropriate Natura 2000 protection elsewhere.’